The techniques and technology employed by the iconographers of the Tryavna School are poorly covered in scientific literature. This study aims to elucidate these types of distinctive characteristics in the construction of three works kept in the depository of the National Gallery. So far, they have not been exhibited owing to their unsatisfactory expositional condition and the need for restoration. The project was financed by the Ministry of Culture in 2019.

Two of the creators of the works under examination were members of the most prominent iconographers’ families in Tryavna—those of Vitan and Zahariy. The third was an unknown iconographer, who most probably gravitated towards the early representatives of the two families and executed commissions for the smaller village churches.

The icon of St Nicholas from the Church of the Holy Mother of God in Kazanlak has been kept at the National Gallery since 1958. In the bottom left corner, there is a signature and a date: ‘ruka Vitanova/1838’ [Vitan’s hand]. Based on this signature, close stylistic parallels and recent studies related to the icons of the Tryavna family of the Vitans, the icon should be assigned to the oeuvre of Vitan Koyuv, born in 1797, and is among the few preserved and signed works of his. It is known that, besides being an iconographer, he was also a highly skilled woodcarver. 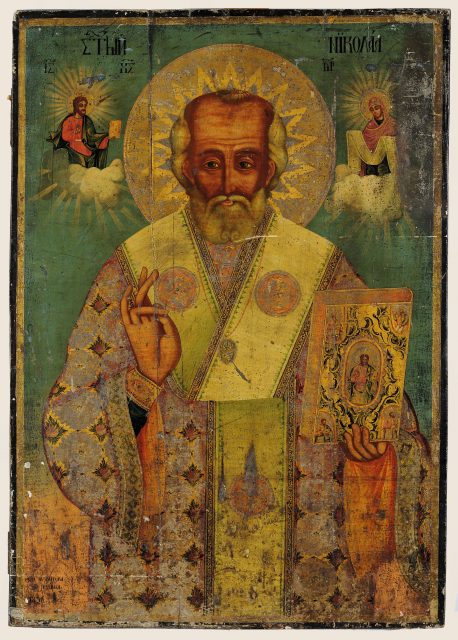 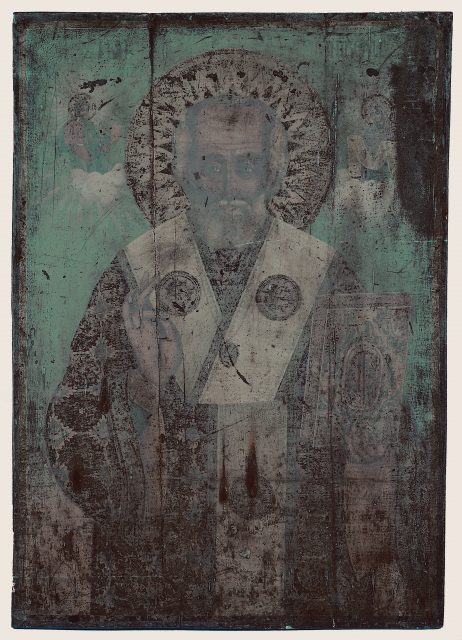 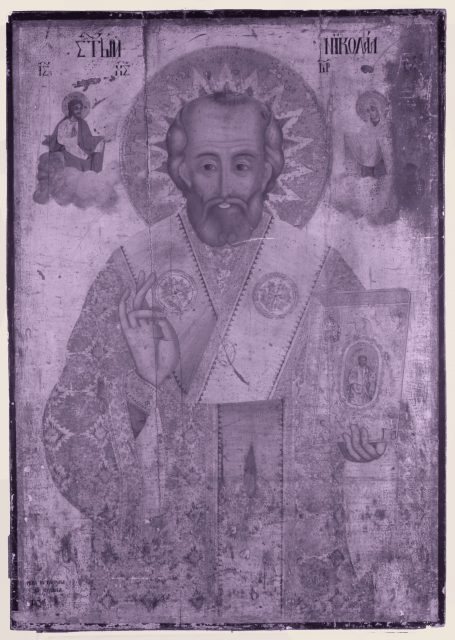 The icon of the Holy Mother of God of Kikkos was received by the Church Museum of History and Archaeology of the Holy Synod in 1925. Probably painted around 1814, it is one of the three icons that survived the burning and partial destruction of the Church of St Athanasius in Perushtitsa during the April Uprising. The style of the unknown iconographer is distinguished by the characteristic personage, colouring and specific stylisation of the body parts and the drapery. He was a contemporary of the little-known Tryavna iconographer and woodcarver, Boncho Dimitrov, about whom there is documentary evidence that he had worked for the Perushtitsa church. It is probable that these two masters, like many Tryavna iconographers of the first decades of the 19th century, found a means for expression and livelihood in Plovdiv and nearby villages. 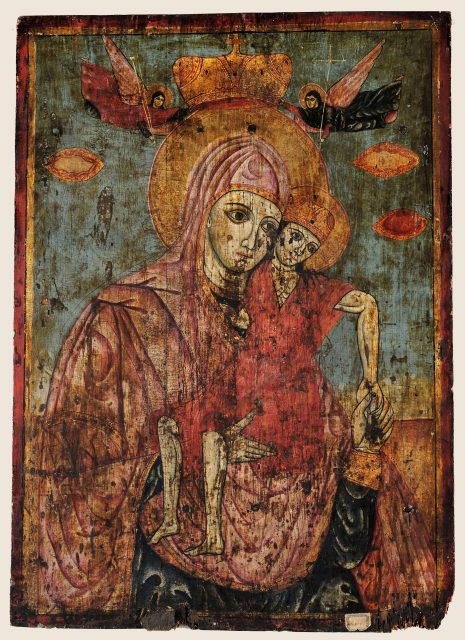 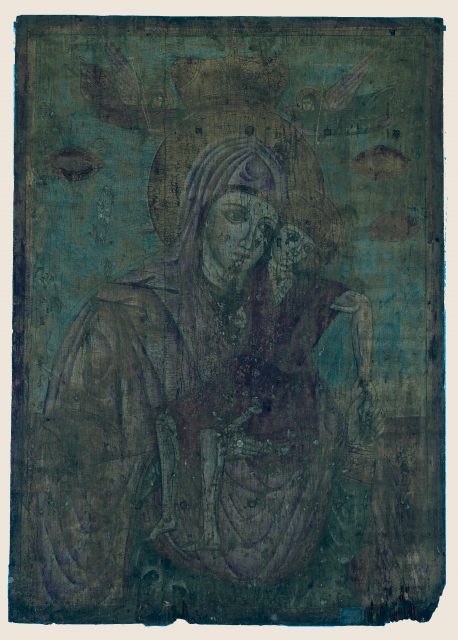 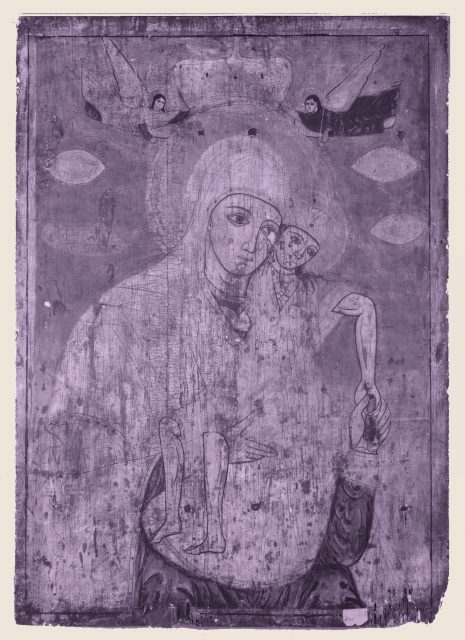 The third work is a shroud received by the National Gallery in 1977 from the Ministry of Foreign Affairs and recorded in the inventory as the work of Zahari Dospevski. The cloth is in a most critical condition, with considerable losses of the paint layer. A highly qualitative painting is visible from the preserved image. Undoubtedly, it is not the work of the Samokov iconographer Zahari Dospevski, but that of Zahariya Tsanyuv from Tryavna. Confirmation of this statement is given by the well-preserved signature of the iconographer at the end of the ktetor’s [founder] inscription: ‘ктитóр стоику жекув и чада егw рука писа захар’ [Ktetor Stoyko Zhekov and his children; painted by the hand of Zahari]. The work is not dated, but judging by the style of painting, it is close to the earlier works of Zahariya and it can be assumed that it was painted for the Church of the Holy Trinity in the village of Chernevo, completed in 1836. The dating of the shroud can be assigned to around 1840.

The shroud depicting the Lamentation over Jesus Christ, ca. 1840 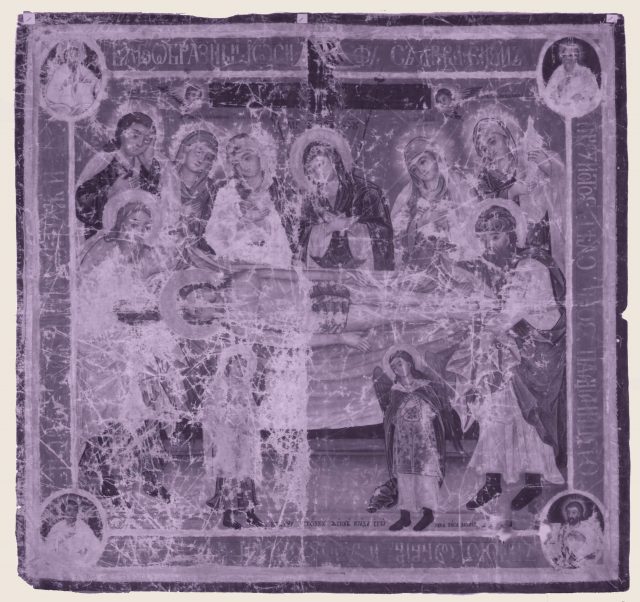 Monumental ecclesiastical painting, along with the other widespread type of painting—the icon—appears to be a major indicator of the changes in the thematics, the symbolism and the form, and from there in the entire stylistic and conceptually aesthetic appearance of Bulgarian painting. The changes in Bulgarian art during the National Revival were related to the introduction and dissemination of new themes and iconographic subjects, as well as the penetration of some stylistic elements characteristic of Western European art. Along with the stylistic developments of this period, a change in the materials and technical methods used in painting also took place.

In technical and technological terms, Bulgarian National Revival painting applied the methods and materials used by the iconographers of previous epochs, but also included a number of new ones. The import from Western Europe of many pigments and dyes used in painting began with the expansion of trade relations.

A considerably larger number of pigments was present in the palette of artists. A particular characteristic of the period was the variety of binders, mainly substances of organic origin. The classical tempera technique did not entirely correspond to the new aesthetic views of the Revivalist iconographer. The introduction of oils into the structure of the layer of painting as separate binders in the form of oil or combined oil emulsions was one of the most typical and important features of the National Revival painting of the period. The techniques of the icon painters also changed, primarily for the achievement of a completely different aesthetic appearance of their works.

The research conducted is aimed, on the one hand, at analysing the technical and technological features of the works and, on the other, at clarifying the reasons for the problems of restoration that have arisen.

Initially, the works were photographed in the visible, the ultraviolet and the infrared spectra. This made it possible to clarify whether there were any secondary interventions on the objects and enabled the preparation of a scheme of material sampling necessary for the study of the techniques and technology. The components of each of the technological layers were examined, which made it possible to elucidate the structure of each of the incorporated materials—pigments and dyes, primers, metal coatings, binders of the paint layer, and varnish.

Interpretation of the results showed that the Tryavna iconographers maintained a strong bond with medieval tradition. The technique of execution was with tempera paint (layered construction of the form through painting of the outline of the images by laying a basic tone, ‘proplasmos’, the building up of volumes with a lighter tone, ‘glycasmos’, and the application of additional shading, contours and highlights), lacking an oil binder for preparing the paints. The following were among the pigments found: white lead, yellow ochre, green earth, copper green, ultramarine, Berlin blue, minium, iron oxide red, cinnabar, realgar, umber, bone and plant black, as well as strontium yellow, which was relatively new to the palette of the Revivalist masters.

The subjects of the study are very well executed in technical and technological terms; the damage has occurred over time, from the impact of unfavourable factors.

The plan for restoration activities, and the selection of materials for them, was based on the results of the research. The materials purchased in the project will contribute to the more precise strengthening, cleaning and disinfection of the works. Their restoration will allow them to be included in the permanent exposition of the Museum of Christian Art and to enrich the overall presentation of the Tryavna Art School.