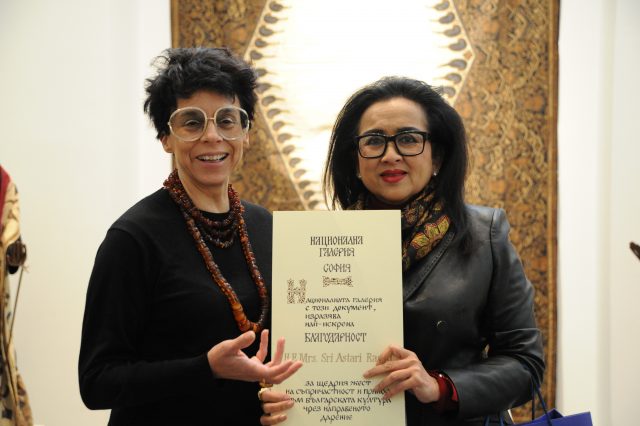 Your Excellency Ms Rasjid, the National Gallery wants to thank you for this exclusive interview. You have been a part of the World of Diplomacy since your childhood (your father was a diplomat). Did you have special time dedicated to art back then?

Me and my two brothers and four sisters, that are older than me, loved to draw comics and watercolours since childhood. I was only 5 years old. After we came back from my father’s mission we were accepted in a Catholic Girls School in Indonesia. I was extremely happy, because it is a very tough and very disciplined school. We were kind of chosen as the painters of the school, because all of us could paint.

You have a remarkable artistic biography. Are you the first professional artist in your family?

Only I realized a professional career in that field. So maybe I am more privileged than my brothers and sisters. They all work. Some as businessmen, others – secretarial work, one of my sisters is an architect, so she used her artistic skills into architecture. But we all kept constantly drawing. We did comic books for school projects, and I also painted for other people so I can earn extra money.

Your works are dedicated to important topics such as human rights, equality, gender and environmental issues. What is your opinion about the power of women in art?

Oh, the power of women! My family comes from Central Java. In traditional Java it was thought that we could not openly express our opinion. We shouldn’t have said bad things and we had to hide our true feelings. In the beginning, I was mainly interested in gender issues, but also women’s issues – not that I focused on women’s rights, but based on my personal need to express my views as an artist, as a married woman in society time. People think that I am a feminist artist, perhaps because I voice many issues about women that are not being fulfilled by society. Making art is a way for me to express my thoughts, my opinion more figuratively, because we are not supposed to hurt other people’s feelings or make them angry. But that was earlier in my life, I have lived for so long—earlier when times were not as open as they are now, especially in my country.

How does it feel to represent your country at the oldest and most prestigious art forum in the world – the Venice Biennale? Tell us more about your participation.

In 2013 I had the fortune to be one of the five selected artists for the 55th edition of the Venice Biennale. We were provided with 500 square meters and I brought a huge pendopo. It looks like a house without walls, in fact it is like a terrace with a roof in the shape of a triangle, which in Javanese culture has a very symbolic meaning. The pendopo should be built against the backdrop of the mountain, and the sea should be in front. The architectural “constellation” in Java is always like that – so you can have the luck, that nature will give you. And in the royal court and in the smallest court of ordinary people, a pendopo is always being built – this is the place where meetings are held, as well as special traditional ceremonies. I used the construction of an authentic old pendopo, which I assembled and painted in red, but without the roof. I brought it to the Bienniale because I thought it symbolized my Javanese culture and traditions, which are unfamiliar to Europeans, and I wanted to show new thinking from my country.
The exhibition was entitled “Sakti” (an old Javanese word from the Hindu period about the feminine force, the creative power that lies within us all). And my work was called ‘Dancing the Wild Seas’. In the construction, I placed nine life-size puppet figures for the Bedoyo dance, which is performed during the coronation of a King in my country. An odd number of dancers take part in it, the tenth being the Queen of the South Sea – the Spirit of Sakti, as we call it by the Javanese faith. When the crowning ceremony is over, after the dance, the King would be left alone with the Queen of the South Sea in his chamber. In order to acquire our Sakti, our feminine force, we simply need to dive into our own sea through our womb and soul.

There is another passion in your life—collecting and preserving. When did this need arise and what caught your attention and marked the beginning of your private collection?

Do you own a work by a Bulgarian artist in your personal collection?

I have several, but I want to collect more.

And you have Bulgarian national folklore costumes?

Yes, I have collected quite a lot of costumes. Every time I go somewhere, I find something that interests me, as well as jewellery. I showed my entire collection of Bulgarian objects at the Regional History Museum in Sofia. They give me a sense of belonging here. I love them. They are part of my story.

You initiated and donated the Indonesian Collection to the National Gallery. Did you make the selection of the artefacts that are already part of the permanent exposition in Kvadrat 500?

This is my collection, formed over the years, from a young age. When I was a newlywed, I wanted to decorate my house with artefacts, so I never bought new things like crystal objects, vases, and similar. All my friends are doing it, but not me. They thought they were ghouls and asked me, “Why are you collecting them?” I told them, “They tell the history.” Every time I go to a city, I buy an artefact from the past. And when I sell my artworks, I always buy something from the past.
I don’t know why I do it, but after coming to Bulgaria, I realized that I could expose them. As an ambassador, I have the opportunity to show our culture, to promote Indonesia, so that people know more about Indonesian civilization, which dates back to the 4th century. Many artefacts have been discovered, mostly jewellery and coins from the past, from the Golden Age of Indonesia, from the Kingdom of Srivijaya.

Is there a single artefact from the donation that you would like to pay special attention to and that tells an exciting story?

I think all of them have an exciting stories. For example, an old and very rare “dodot” – a wedding costume for both – the man and the woman. The canvas is already thin as paper. Or the leather Gununga puppet, that has the shape of a mountain. The performance begins with this puppet because it is a symbol of the journey to the divine and therefore marks the beginning or the end of an episode of a particular story.

Don’t you think it is fateful that the Indonesian Collection is presented in the same hall with the Gallery’s collection of Buddhist Art from Myanmar (Burma) where you lived and where your father was a diplomat?

I am surprised that you asked that question because I didn’t realize it. But when I first came to Kvadrat 500, I saw this collection and thought, “Oh my God, this is from Burma, where I was!” And I said, “How come Indonesia is not here?” Then I decided to donate some of my personal collection to the National Gallery. I will donate more so that you have more of the spirit of Indonesia.

You build bridges between worlds and cultures and one already exists here in the National Gallery. Thank you very much!

Look at “The Embassy of Indonesia and the National Gallery in Intercultural Dialogue” here. 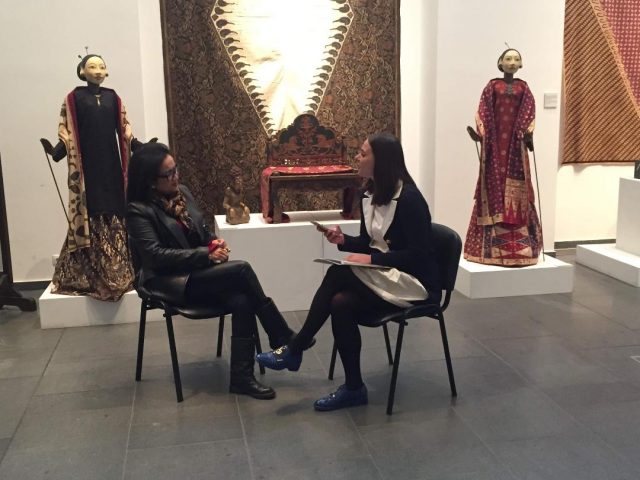 Interview by Yana Bratanova,
curator at the National Gallery