This year, within a month and a half, the National Gallery presented the contemporary artist Christian Bakalov in Sofia Arsenal – Museum of Contemporary Art with his installation “CLEAN (future)”. 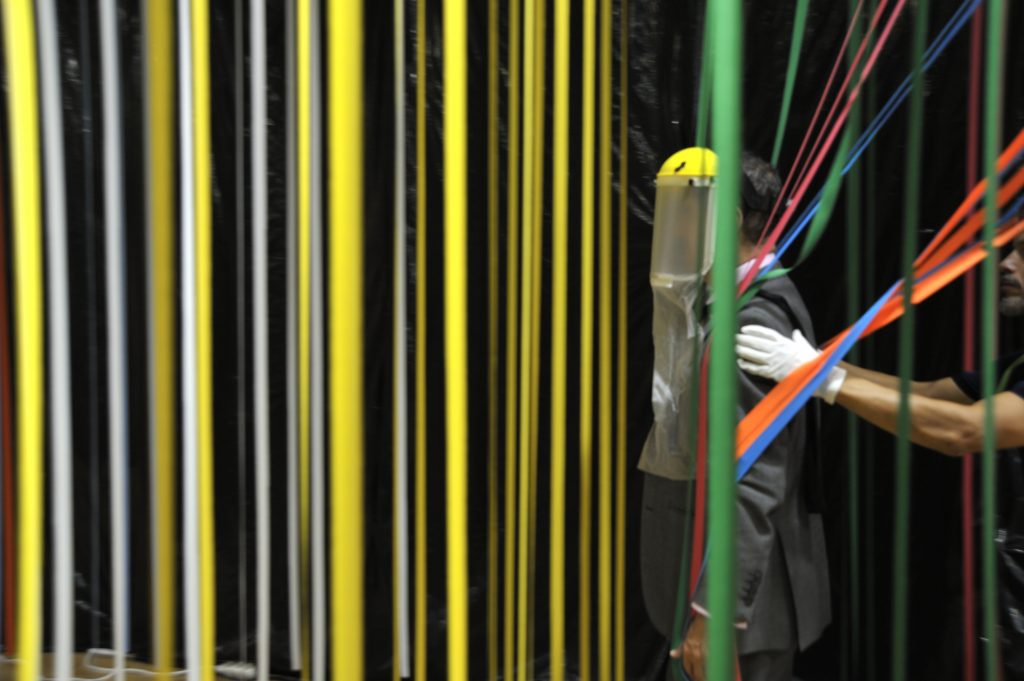 ‘PURE (future)’ is the second installation of the ETERNIA trilogy, dedicated to the Dutch philosopher Baruch Spinoza’s concept of eternity. Its tour began in Belgium, passed through New York and, for a month and a half, it was in Sofia, adapted especially for the spaces of the Sofia Arsenal – Museum of Contemporary Art.
What was the reaction of the public to PURE in New York, and what changes did the installation undergo given the emergency situation and the measures we have to live with?

The second part of the trilogy is very important to me, as it corresponds to a stage in my personal life. Because of his philosophical treatise “Ethics”, Spinoza was excommunicated from the church and declared a heretic. The philosopher considers three levels of cognition, each of which has its significance in human development; but not all people manage to attain them. Some stay on the first, others remain at the second; only geniuses reach the third. The second level is very important, because it refers to the moment a person realises the connections of which he is composed and those he creates with the world, i.e., he begins to penetrate, to have adequate ideas, to rationalise the world in a different way, not merely through passive effect: ‘Every man, by the laws of his nature, necessarily desires or shrinks from that which he deems to be good or bad.’ [E4: PROP. 19]. There is, at this level, а certain insight, and ideas that correspond to it.
I shall complete the third part when I myself am ready for the stage of realising the essence, which according to Spinoza is ‘a unique substance of the universe’, and this is God, who is absolutely everything, and we are part of this Lord. Spinoza contrasts eternity with religious immortality, where there must be something before and something after the incarnation of the spirit of which he says, ‘We are already in eternity.’ Life is given to us to experiment with this eternity in some form. The experiment I perform here and now is important because it detaches the viewer from this reality, immersing him in another, which turns out to be the one we should exist in all the time. That was very important to me.
Apart from that, the response of the public in New York, Paris, Brussels and Sofia was absolutely the same. People reacted in the same way to touch, to being alone with yourself, to discovering the limit of your own courage, of your own curiosity, of control. Many people’s problem is that they control absolutely everything and suddenly they have to loosen that control. They also have a problem with the wonderful feeling, which I can call almost a kind of universal love, which is to devote yourself to the other, the stranger, to trust him without seeing him and to be innocent of wrong intention or suspicion. Purity in relationships is innate in us, but for thousands of reasons, it is overwhelmed by the entire quotidian and contemporary hogwash we experience. These topics are universal to people, despite differences in their cultures. We are all, seven billion of us, one and the same organism, and the only thing that sets us apart is that we are men and women, and that we have different cultures. But even these two small differences cannot suppress what people experience in the installation. If the artistic language I have found has succeeded in touching all people equally, despite the differences in their cultures, it means that I have done the work in some way.

While awaiting their turn in front of the museum, the visitors to ‘PURE (future)’ were handed texts to read. What stories do they tell?

This is an idea that I began developing from the outset of PURE. In each city, I work with and meet different people with whom we often touch on the subject of life and death. I was intrigued by how we ourselves see our own life: how we see it now, how we see it before the first memory, and how we see it from now until the last memory we shall have. I started inviting all the performers, participants in the spectacle, to describe their lives, on a blank sheet, in three stages. The first is from birth to the first memory as a documentary fiction: everything they learned from their grandmothers and aunts, stories, told by their mothers, that they do not remember but actually happened, and how they refracted them through their own vision: from the first ray of light that comes into your mind that sometimes gives you an entire meaning to this world. The second stage is from the first memory to the present moment and covers the most essential that has shaped you as an individual; the third stage is from now until death, including how it happens. A total fiction where our desires, our expectations and fears are visible. It became interesting because everyone writes in a different style. It turned out to be a collection of many different stories, which united in a particularly pleasant way.

A personal guide is provided for each visitor to the exhibition—the individual installations are activated by performers. Few modern art centres and world museums can afford such a resource. How many people are involved in the current exhibition, and on what principle were they chosen?

I should like to thank the National Culture Fund of the Ministry of Culture and the National Gallery for providing me with this opportunity, which very few museums in the world are granted, as well as Sofia Municipality for the media support. The team consists of fifteen people; we work in shifts of four hours, because it is difficult for one person to remain standing for eight hours and greet different people who literally pass through his hands—each with his own energy, with his own day, arriving with his own psychological and emotional burden, which we must set aside in order to succeed in immersing them in another atmosphere.

Recently, Joanna de Vos published footage from Jan Fabre’s film ‘The Man’, where the main role was entrusted to you. In 2019, she was the curator of Jan Fabre’s exhibition ,‘There Is No Escape from Art’, in the same galleries of Sofia Arsenal – Museum of Contemporary Art. You have worked with other world-famous names in the field of contemporary dance and visual arts such as Jérôme Bel, Robert Wilson and Ivo Dimchev. Would you tell us more about your joint projects, as well as about their attitude to and opinion of you?

I would love to tell you, but we just don’t have the time for each one. Undoubtedly, those who shaped my world view as an artist were Jan Fabre and Ivo Dimchev, with whom I continue working even today. Not so much with Ivo anymore, because he progressed to a different stage, but Jan and I still have artistic encounters, such as the short videos I have been making with him in recent weeks. I have to record others with text that appeared in Bulgarian in his Night Diaries. Jan gave me the idea of how everything can be mixed so wonderfully and look amazing through being stirred up, broken into pieces and transposed. He is a transformer, one who suddenly metamorphoses from one into another, and from a third into a fourth. It was most intriguing when I began to work with him in a troupe of thirty musicians, actors, dancers and designers. The dancer was given lines while the musician was supposed to dance. He shuffles the tasks so as to keep everyone in suspense. He is not interested in what you know how to do: he is interested in what you do not know and the breaking point, when you suddenly liberate yourself from the armour you have deployed so that the real, fragile ‘I’ emerges, bearing the truth and the essence of the beauty of art. It was wonderful to see how Jan could dare and how all my colleagues and I not only succumbed to this game, but we started to like being on stage. It is then that you defend what you do in a different way, for it belongs not only to Jan, but also to you. It comes from you and, on stage, it is you with your inner world. Jan calls us my soldiers of beauty, and we as such have truly fought for his art, because it is also ours.
In my opinion, Ivo is a real little genius, whom Bulgaria has not yet realised that it possesses, and who will one day enter the textbooks. I hope we shall still be alive to see how our children study him, because he is multitalented, very peculiar and strange; he goes even further than art, beyond everything. He is so multifaceted and very gifted, I ‘m at a loss for words. So dedicated, he wakes up and goes to sleep with the thought of creating, and refracting everything in his own way, to get away from repetition, from imitation, with honesty and responsibility to the public; to present to it something that comes entirely from within himself.
Meeting these people gave me strength; however, I cannot say that what I do is similar to what they do. When Ivo came to see BRIGHT (the first installation in the ETERNIA trilogy), what was most important to me was what he would say. I was not interested in the journalists, nor was I interested in anyone else, for he knows me very well as a person and an artist. When he told me he had twice burst into tears, it was the best compliment I’ve ever received. Jan, of course, has also always supported me, even picking up the phone to tell people, ‘You have to go!’ It is a great honour and privilege that such artists stand up for you and your work. This is a small family I have. We do not see or speak to each other every day, but we know we love and respect each other. I continue to be an absolute and fierce fan of both artists.

By Yana Bratanova, curator at the National Gallery
18 September 2020 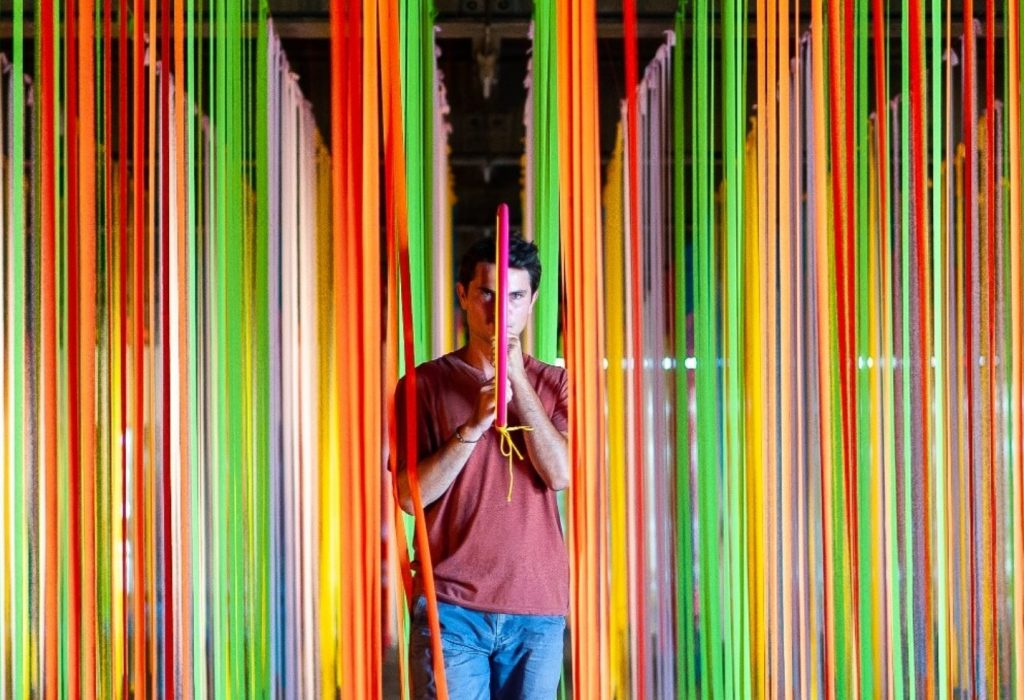