Wooden ‘ratha’ chariots are used by many temples for processions during annual Hindu festivals. The main function of festival chariots is to serve as a means of transportation for the figure of a deity or deities. During festivals, after paying respects to a chariot in the temple, it moves around the settlement. After the parade, the chariot is kept in the temple.

In the panel composition from the National Gallery, one of the most popular stories related to Krishna – “The Clothes Thief” unfolds. The subject is presented symmetrically in pairs of panels, with the narrative flowing in a direction from the outer to the central panels. On the lowest peripheral panels, the god Krishna is depicted playing a flute, mounted on a tree, and below him are the shamed gopis (cowherds) whose clothes the playful Krishna has stolen as they enter the river to bathe, leaving them naked. In the second highest pair of panels, this plot is retained and the majority of gopis, represented rhythmically in two registers, continue below a pair of figures depicted without recognizable attributes. The plot is complemented by the presence of the sacred bird Garuda perched on top of the tree.

The Front Panel Wall of a Festival Chariot from the National Gallery is first featured in the Lord Krishna Exhibition 16/08/2022 – 16/10/2022, extended to 08/01/2023 at Kvadrat 500, as her study ‘Attribution and Dating of a Panel Composition from Kerala, South India from the collection of the National Gallery” by Ioana Tavityan and Zlatka Dimitrova is presented at the International Scientific Conference “Oriental Studies – Traditions and Modernity” in memory of Prof. Dr. Alexander Fedotov, SU “St. Kliment Ohridski”, Sofia, October 15-16, 2022. 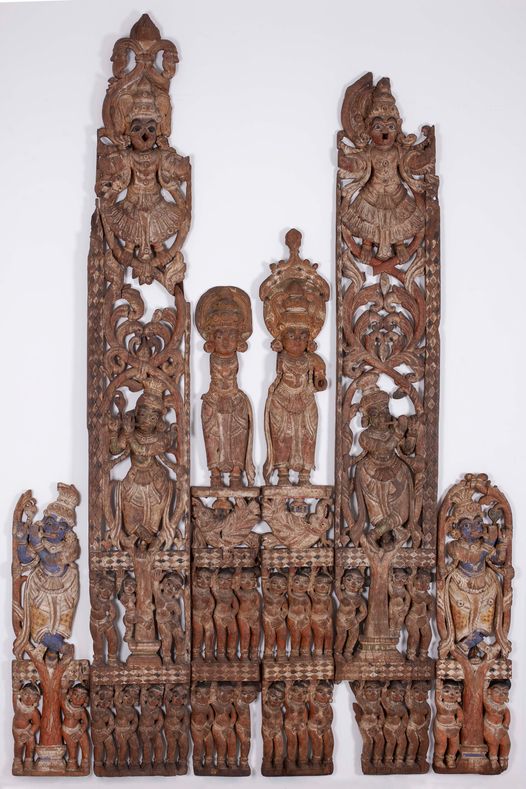